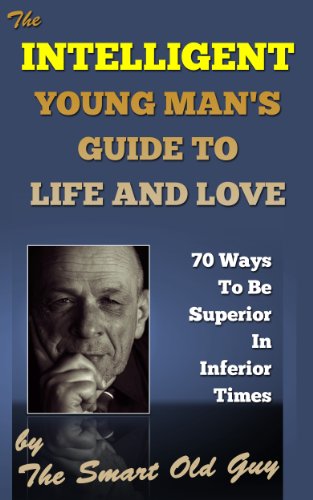 The author of THE INTELLIGENT YOUNG MAN’S GUIDE TO LIFE AND LOVE is disgusted by the way our culture treats young men as childish clowns driven only by adrenalin and testosterone. In 70 short chapters, The Smart Old Guy opens new pathways for young men like you with the brains and imagination to want more out of life than what they see on TV. And he does it without preaching—this book is written for people who enjoy style and wit.

THE INTELLIGENT YOUNG MAN’S GUIDE TO LIFE AND LOVE will tell you why it is a good thing to be a snob, how to watch out for the tricks the old play on the young, which four magic words will open any door (and must never be said!), and why a rapid retreat is often the true Way of the Warrior.

The Smart Old Guy also has lot to say about those fascinating women you need to resist—and probably won’t be able to. It tells myths and stories about, among other things, an Indian goddess come to earth and an ancient Greeks who tells us how to live by knowing how to die.

He tells you what strange books to read and what bizarre films to see. And in a handful of sentences he will tell you whether you should get married or not. And he gives dozens of tips on breaking free of our trashy—and increasingly stupid—mass culture.

Get Up To Speed

Each chapter is a discrete unit with its own separate theme. You could read the book in reverse order if you wanted to.

8. WHAT TO DO IF YOU MEET A GODDESS

A good way for old people to teach the young is by telling stories. Here’s one I heard when I was about fourteen years old. Amazingly, I heard it on a TV talk show, something that could not happen today.

This story takes place in India in ancient times. One day a young man goes into the forest to gather firewood. He enters a clearing in the forest and sees there the goddess Pavarti, the wife of the chief of the gods Shiva. Pavarti is standing next to a small tree that is wilting to the ground. She says to the young man: “This tree is dying of thirst. Get it some water––now!”

The young man knows if a goddess tells you to do something, you do it, so he sets off through the forest to find water. After a long trek, he comes to a village and heads for the well. But along the way he spots a young girl also going to the well, and he says to himself, “I like this place. I could stay here.” And he does. Soon, he gets acquainted with the girl and her family, and they are married. They live in her village, raise a family, see their children have children, and watch the years slip past.

One day the man, now very old, goes into the forest to gather firewood. He enters a clearing where he sees the goddess Pavarti standing next to a small tree. “Where have you been?” she says, “I have been waiting ten minutes!”

After fifty years, I cannot tell you what this story means. I wouldn’t even try. What matters is that I have never forgotten it. Now––go find your story.

Don’t waste your precious time fighting with your parents. Just thank them for their advice even when it is total rubbish and then go and live your own life as you see fit.

(This applies even more to girls who are always mixing it up with their mothers. What a way to piss your life away!)

It is also a waste of time and energy rebelling at school or on the job like some petty anarchist. Turn your back on the silliness of your contemporaries, those sad middle-class babies, who defy society by getting postered over with tattoos and sticking metal in their faces, dressing for life like it was a Halloween party.

If you catch yourself complaining about your job (or school or parents or girl friend), bite your tongue until it bleeds. Every time you feel like whining, remember the taste of blood.

Pissing and moaning is nothing but a mechanism to avoid taking action. You have a hard job in front of you, which is simply learning to be yourself. Succeed at that and you will be a true rebel turning this corrupt world on its head.

10. WHY RADIO TALK SHOW HOSTS SHOULD SHUT UP

There is no challenge too complicated,

no problem too intractable,

no crisis so dangerous,

that someone cannot come up with a simple, clear-cut solution…

…that will always be wrong.

By the way, I took the idea on the previous page from Winston Churchill, a clever man with words. I mention this because it allows me to teach you a rule all young people should know:

STEAL FROM THE BEST!

Of course, I don’t mean plagiarizing. I do mean that after you discover those writers who speak to you, you should learn their tricks and then see if you can do them too. It’s more a matter of imitating what is really good than actual theft. Eventually, you will develop a voice that is your own––more or less.

However, I must admit stealing plots from the classics is a great time-saver. Shakespeare did it all the time. Change a little bit here and a little bit there, and no one will have a clue you filched it from some literary lion. And, it is so much less obvious when you “steal” from the dead.

None of this need be unethical or immoral. Besides, a writer’s life is tough enough. Any little boost up is always welcome.

Avoid pornography. It will turn you into a eunuch—a squishy, watery-eyed blob whose manhood leaked away long ago in the lonely pursuit of ever-diminishing pleasure.

Would you like to see a really sexy movie? Watch Summer with Monika. It’s a Swedish movie made in 1954 (in black & white, of course) directed by Ingmar Bergman. At that time in the pure-minded U.S.A. it was thought to be a dirty movie because it has a naked girl in it. But I don’t know any other film that captures the excitement and sadness of sexual passion when you are young. Monika is played by a famous Swedish actress named Harriet Anderson, and without surgical enhancement or even makeup, she can make you quiver with desire. After this movie you’ll want to go out and meet a real girl.

I’m not big into slamming my head into stonewalls. I know this culture is already porn-saturated. I know I lost this battle a long time ago.

But that doesn’t mean I’m not right.

The true Way of the Warrior is out the back door.

The Way of the Warrior is the way away from violence.

By running away, you will live to fight another day.

You will also have a chance to set up a first-class ambush.

Did you love this sample of
The Intelligent Young Man’s Guide to Life and Love?

Read the rest of the book in the following formats:
Kindle
Share this Hook:
Share with your friends
Submit
Captain HookThe Intelligent Young Man’s Guide to Life and Love03.03.2014

Hooks are simply excerpts of books provided by authors to help you get a feel for what you are buying before you make the purchase!

Know if a book is for you by reading the Hook here at Hooks by eBooksHabit.com.