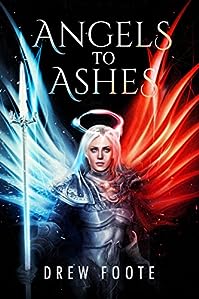 Barnabas, a Demon of Pride with the predatory heart of a salesman, defies the will of the Inferno.

Kalyndriel, an Avenging Angel, staggers beneath the weight of her own sin.

Walter, a damned human, witnesses the impossible, both on Earth and below.

Three unlikely allies unite against a terror beyond good and evil. Threads of desperation bind their worlds together: Hell, Heaven, and Earth. The emptiness before time gives birth to an abomination … one who dreams of unraveling the tapestry of the God who abandoned His children. 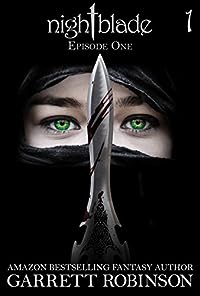 FIGHT FOR YOUR DREAM, OR THEY WILL TAKE IT FROM YOU.An epic tale of adventure, with characters you’ll never forget.

Everyone begins their life dreaming of the great person they could become, only to have those dreams battered and broken by the world around them. The world tells them they’re not special. Family convinces them to abandon their goals for the safe route, the sure route.

Loren has been born to cruel parents and raised in an obscure village. She’s long resigned herself to an unremarkable life under the sway of a father who beats her and a mother who sees her only as means to a dowry. Loren’s dreams have almost burnt out—until fate rekindles their spark into a flame that will consume the world. 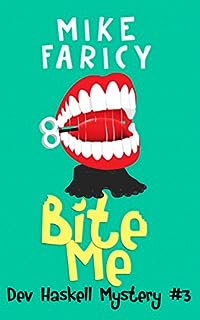 Things quickly fly out of control when Dev suddenly finds himself under the police microscope, literally tied up in a relationship with an unpredictable woman, and dodging a growing pile of bodies that all seem to be linked to him. 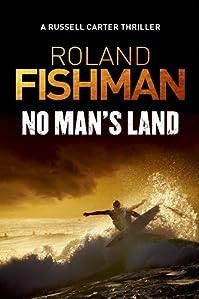 Carter has turned his back on everything he ever believed in. A year ago he walked away from the order and its leader, Thomas Wing, a man he once regarded as a father. Since then he’s been living the good life, surfing at Lennox Head and trying to forget his past.

On Christmas Day Thomas is kidnapped from a remote bush property near the Queensland border, and Carter is sucked straight back into the violent world he left behind. Now an Indonesian terrorist cell is trying to kill him – and every other member of the order.

With Carter and the order out of the way, the terrorists hope to carry off a daring attack on Sydney Harbour on New Year’s Eve – just days away – when huge crowds gather on the water and foreshore to celebrate.

Carter is forced to team up with Thomas’s daughter, Erina – the only woman he has ever loved, and who he abandoned without saying goodbye. Together they must travel into the wilds of Indonesia and back again in a desperate bid to save Thomas – and the lives of thousands of others. 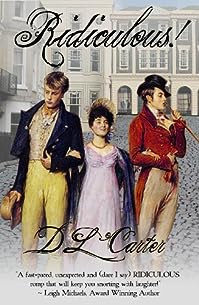 Identity theft regency style. After the death of her miserly cousin Antony North, Millicent Boarder is determined her family should never be poor or vulnerable again. To protect them she conceals her cousin’s death and assumes his identity. Now she must face the Ton and the world as Mr. North and accept the price she must pay for her family’s safety — she will never be loved.

Alaska State Trooper Liam Campbell, demoted and reassigned to the remote bush town of Newenham, literally steps off the plane into a murder scene. Dealing with death is never simple, but when the woman leaning over the body proves to be Liam’s old flame, it’s evident that his new job is about to become much more complicated. Of course, small town tensions tend to simmer just beneath the surface, and murder, once done, has a tendency to happen again. 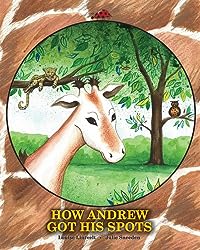 How Andrew Got His Spots

Poor Andrew is feeling very blue, all the other giraffes are very spotty but he is as white as can be. He does not have any spots, you see!

He keeps seeing spots wherever he goes… 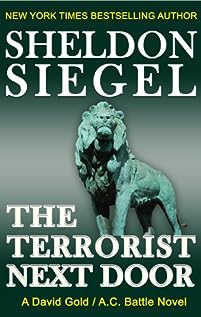 The Terrorist Next Door

He’s Homeland Security’s biggest nightmare. Someone is setting off fire bombs in Chicago in stolen cars using untraceable cell phones. The international terror channels are silent. A group calling itself the Islamic Freedom Federation demands the release of Hassan Al-Shahid, a graduate student whose plan to set off a bomb at the Art Institute was thwarted by Detective David Gold and his long-time partner, Detective Paul Liszewski. Their heroic efforts had cost Liszewski his life and put Gold in the hospital. The FBI and Homeland Security believe the bomber is a freelancer operating off the grid. 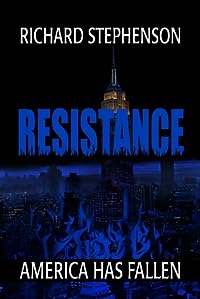 Eighteen months after the Collapse of 2027, the former United States is divided. On one side is the evil and tyrannical Unified American Empire, controlled by President Simon Sterling, the man responsible for the death of the last legitimate president, Malcolm Powers. On the other side, President Howard Beck controls the Pacific States of America, the last hope for democracy and freedom. The two adversaries become embroiled in a bitter game of deception, betrayal, and espionage while battling an even more imposing menace that could easily destroy the very nation they are both desperately fighting to control. 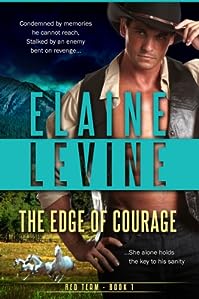 The Edge Of Courage

Haunted by memories he cannot reach, stalked by an enemy bent on revenge . . .

Rocco Silas has come home to Wyoming after long years as a Red Team operative in Afghanistan. It isn’t easy returning to civilian life, especially burdened as he is with a staggering case of PTSD or hunted as he is by an enemy determined to seek an eye-for-eye–neither of which can he battle until he confronts the truth of what happened one fateful day in the high mountain ranges of the Hindu Kush.

Mandy Fielding’s dream of opening a therapeutic riding center on her family’s ranch is almost within her grasp–until she hires Rocco Silas, a dangerous ex-Spec Ops friend of her brother’s. His haunted eyes and passionate touch promise a love she never dared believe possible. Can they confront the truth of his past and build a future together or will the enemy stalking him destroy them both? 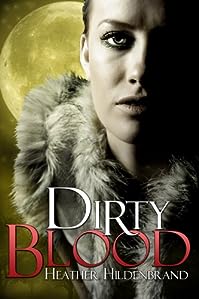 I killed a girl last night. I did it with my bare hands and an old piece of pipe I found lying next to the dumpster. But that’s not the part that got me. The part that scared me, the part I can’t seem to wrap my head around and still has me reeling, was that when she charged me, her body shifted–and then she was a wolf. All snapping teeth and extended claws. But by the time I stood over her lifeless body, she was a girl again. That’s about the time I went into shock. And that was the moment he showed up.

Now, all I can do is accept the truths that are staring me in the face. One, Werewolves do exist. And two, I was born to kill them.

“Heather Hildenbrand is one of my favorite YA paranormal authors. Her Dirty Blood series is a must-read!” -Ella James, author of the Stained series

Fans of YA Paranormal, Hunters, Shifters, and Werewolves will love the Dirty Blood series! 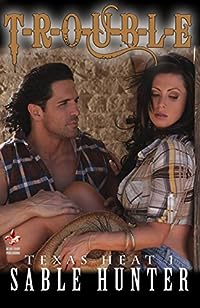 Trouble comes calling on Kyler Landon. He falls hard and fast for his beautiful, mysterious neighbor after she saves him from a rattlesnake attack. The sexual tension mounts between them with each sensual encounter, but he soon realizes that Cooper has been hurt and is leery of men. So he sets out to teach her that a real man can be gentle, loving, and sexy as hell.

Trouble seems to follow Cooper, and Ky makes it his mission to protect her from her past. Kyler would move heaven and earth to keep her in his bed and in his life. 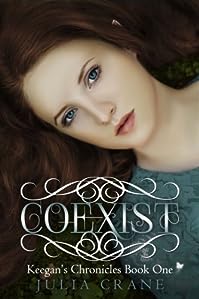 Sixteen-year-old Keegan is struggling to keep her huge secret from her friends—she’s an elf, descended from a long line of elves that live in secrecy alongside humans.

In elfin society, mates are predetermined but not allowed to meet until they are eighteen. Against tradition, Keegan’s brother Thaddeus told her Rourk’s name because his visions warned him she’d need Rourk’s protection, especially since Keegan will play a key role in the coming war between the dark and light elves.

Rourk finds himself drawn to Keegan’s side every time she thinks his name. He wants to talk to her but remains in the shadows, silently guarding her every time she mentally beckons him. A twist of fate thrusts the two of them together when Rourk is forced to step up his protection and make his presence known.

An ancient prophecy deeply entwines Keegan’s family and the future of their society. Somehow they must find a way to thwart fate and win the battle…without losing Keegan. With war brewing, and dark forces aligning, will Keegan and Rourk ever have the life together that they both desire? 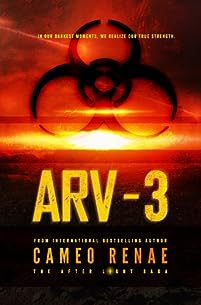 The beginning of the end. The Apocalypse.

A nuclear fallout wiped out every living thing on the planet, except for a few thousand of us who took shelter in underground bunkers across the globe. Now, after thirteen long years, we were finally able to return to the topside to begin to rebuild.

We thought we were alone. We were never more wrong.

Before the fallout, scientists had worked on creating an anti-radiation vaccine (ARV). The first two attempts failed, but despite the incomplete tests and results, the government approved and distributed the third serum to the masses in an effort to aid those who had no shelter.

It worked, keeping those who remained on the topside alive, but it also altered and mutated them. This new and infectious threat had completely outnumbered us. Now, we not only had to rebuild our planet. We would have to fight for it.

My name is Abigail Park. I’m seventeen, and this is my story.